An average speed of 94 km/hour to Vienna and back may not sound exciting to those who sit smugly on the Eurostar and average 250 km/hour between Paris and London. But it’s pretty impressive in former communist Eastern Europe, where the cost of upgrading the line to TGV capability is prohibitive.

True, it’s only three times faster than a good sprinter, such as Usain Bolt, but he runs a shorter distance, and probably couldn’t keep up the pace for as long as 12 hours.

I took the new RailJet service from Prague to Vienna and back last week. It takes only four hours and ten minutes each way, in comfortable, modern carriages. It’s a shame there’s no WiFi, but there are power sockets between the seats, screens that tell you where you are and how fast you’re going, a nice modern smell of new carpet, and a smart restaurant serving utterly unpalatable food (but that’s a matter of taste, I suppose). 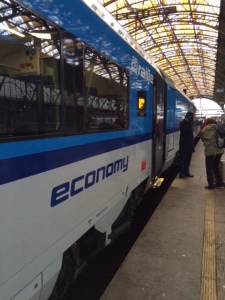 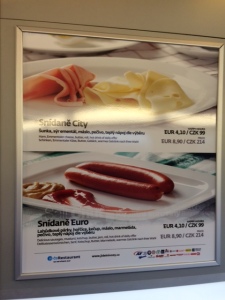 Many things are getting better. And to cap it all, there’s a fabulous new railway station to enjoy on arrival in Vienna..

It’s an easy day-trip to Vienna and back, now, no longer the exhausting, rattling, shabby horror trip it once was. But the old dining-car certainly did a better breakfast.