The modernist maxim that form should follow function is fine if you can agree as to function. What, for example, is the Sydney Opera House?

As an opera house it is not well served by its fabulously soaring shells. The auditorium is like a shoebox stuffed into a narrow but high arched vault. But you might plausibly propose that its function isn’t operatic at all, that it was always intended, not as an arena for Dame Joan Sutherland and her like, but rather to serve as a symbol of Sydney, of Australia, of difference, and as a celebration of the notion that in the New World anything is possible. The building welcomes you to Sydney just as the Statue of Liberty welcomes you to New York. In this sense its form follows its function well. It is sculpture, or beacon, not building.

Of course, it has also, at Ascot, been a hat.

Construction of the Opera House was a sorry story. Danish architect, Jorn Utzon, submitted sketches to the selection panel in 1957 and the immense problems of actual construction were only resolved much later through close collaboration with Ove Arup, using, for the first time, computers to calculate stress. The final form comprises surface sections of a sphere.

The project ran 14 times over budget, and Jorn Utzon’s interior spaces, initially only sketchily conceived, were completed by another architect after Utzon’s resignation, which was provoked by the philistine bureaucrats who controlled the money (how dangerous would it be if they were not philistine?). 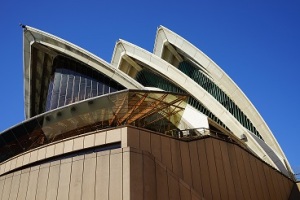 It is one of the great architectural wonders of the world and one of few modern buildings to become a UNESCO World Heritage Site (2007).

4 thoughts on “Form and Function”