The majority of competitive games were invented by the British: football, rugby, tennis, badminton, ping pong, hockey, golf, lacrosse, cricket, snooker, rounders, baseball, polo. You name it, we invented it, or wrote down the rules.

Not that I’m suggesting that the British are Best. Far from it. Other nations had far better things to do. Whilst the British were playing ball games in the drizzle, others were doing more important things: the Italians were making love, the French were eating frogs’ legs, the Russians were drinking vodka, the Germans were doing things with cabbage, and the Czechs were making dumplings.

So it’s odd, this week, to be in a city where the citizens have gone mad about a game that the Brits don’t play – Ice Hockey. Actually, I have to admit that they simply call it ‘Hockey’ here, and refer to the lovely game we play on grass as ‘Field Hockey’. Ice hockey is a brutal, high testosterone game played with a black rubber lozenge called a puck. It’s not for gentlemen. The best at it are the Russians,, the Czechs, the Swedes, the Finns, the Americans and the Canadians, and they’re fighting it out in Prague and Ostrava for the annual World Championship. 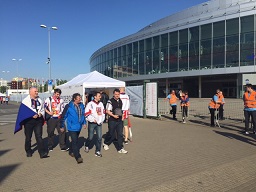 So the streets of Prague were empty last night as the Czechs played the Finns in the quarter finals, from time to time the pubs erupting with raucous cheers, presumably for the Czech team, who won 5-3..

The problem is that the O2 arena, where the biggest matches are held, is the building our office overlooks, so our working day is punctuated with the bellows of the crowds, the amplified shouting of the commentators, all broadcast to a big screen just beneath my window.

But, if you can’t beat them, join them. Everyone is wearing the padded shirts and armour that go with the game, whether players or supporters, so this is how I’m going to work today. 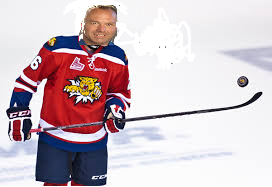