Philosophers of a certain persuasion have long been obsessed with definitions. ‘What is justice?’ Socrates asks Cephalus at the beginning of Plato’s Republic, and in the blink of an eye everything we know is just a shadow on the wall of a cave and the essence of things (the ‘Platonic form’ in which all actual instances supposedly participate) has retreated into an ideal world we cannot perceive directly. 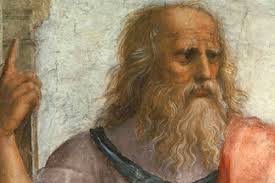 The essence of Plato as perceived by Raphael

‘What is the Platonic form of a chair?’ you might ask. What is the ‘chair-ness’ that all chairs share?

What is knowledge? Is it just ‘justified true belief’?

And what is a number?

Philosophers of another, more sensible, persuasion ask, ‘Why ask “what is the essence of” at all?’

But even if I am of the latter persuasion, I was asking myself the other day, ‘what’s a company?’

I had a very different idea before the Great Flood in Prague in 2002. A company, I used to think, is a place, an office, with desks, shelves, a reception area, noticeboards, a kitchen, and of course people and devices of various kinds.

I was thinking of the flood as I drove through Karlin a few days ago. Karlin, the district of Prague where our office was then located, stands on the Vltava’s flood plain, just a metre or two above the standard high water mark. When the floodwaters rose they reached the first floor of every building (you can still see the water mark in some places) and poured into the the metro too, despite the supposedly watertight and nuclear-proof doors.

We were given just three hours by the authorities to leave. Three hours to choose what to take to ensure business continuity. Longer, of course, than you’re allowed when a plane crash-lands, when, as you will recall from the safety instructions, you must take NOTHING with you at all. But the surprise for us was how little we needed to pack. Just our PCs and servers. Most of the paper stuff we could leave behind.

So what a company turned out to be was just the people, our PCs (usually very portable notebooks) and the server containing all our business information and software systems. In a day or two our IT department had set us up in temporary headquarters in a half-empty factory. Business impact, almost none.

That was 13 years ago. Nowadays, when everything electronic can be stored in the ‘cloud’ rather than on a company’s servers a company is even less. Just a few people and some notebook computers.

When it comes down to it, a company is nothing more than a network of legal contracts binding employees, customers, and intellectual property together.

The Platonic form of a company is a pretty flimsy thing.