I was living in Budapest in June 1989 when Viktor Orban made his impassioned speech in favour of free elections and against the presence of Soviet troops in Hungary. The occasion was the reburial of Imre Nagy. This reburial of the executed reform-communist who led the ‘counter-revolution’ in 1956 was astonishing in itself in a country that was still a one-party Communist state, but that Viktor Orban, then just 26 years old, should be allowed to make a firebrand speech against the Communist regime and Communism in general was even more remarkable.

[Incidentally the night before saw the most moving example of quiet political power that I have ever witnessed. Opposition politicians (a new breed of citizen in 1989) had asked all those who were opposed to the Communist regime to place a lit candle in their window. I passed through the streets in a taxi late in the evening and there was a candle in every window. If you were a Party bigwig then that night you knew for sure that your time was up.]

I had been in Hungary since the summer of 1987 and had seen the Communist regime gradually decaying, ever more rapidly after Gorbachev had promised not to interfere. I was working as a consultant on a long MRP software implementation for a television factory, Videoton, in Szekesfehervar, a town about 80 km from Budapest, and I well remember my Hungarian colleagues advising me to stay off the streets on the day of the reburial. They feared a violent crackdown on the emerging opposition, something like 1956 all over again. But of course nothing of the kind happened.

Viktor Orban was then astonishing – radical, energetic, a freedom fighter willing to take personal risks for his cause. Admirable, it seemed at the time. And today he is Prime Minister, fomenting petty nationalism and intolerance.

I loathe the views attributed to Viktor Orban in this article: 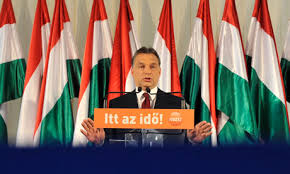 Why should Europe be Christian? Our ethical viewpoint is more ‘Abrahamic’ in origin than merely Christian, its assumptions shared by Jews, Christians and Muslims alike. And, importantly, shared by the secular, even atheistic majority to which I belong. And by people of other faiths, too. The majority of Europe’s population may be Christian by faith or culture, but that is not what unites us.

What about the good Samaritan? Christianity teaches charity, even to the stranger. We must make a place for those who make it to our shores.

What do Hungarians have to fear? The Hungarian language and culture have survived a thousand years of siege by other cultures and languages, and occupation by some. Why should they fear anything now? Cultures are resilient.

Why shouldn’t a culture evolve and change? I live partly in London, which remains a British city even if a large minority of its inhabitants were born outside it. It is one of the most vibrant, exciting, innovative cities in the world, stimulated not held back by its multicultural character. Would that Budapest were similar!

Isn’t there a slight whiff of hypocrisy about all of this, if you consider Europe’s colonial past? Hungary was not, of course, as adventurous in its propagation of Christian civilisation as many other European powers, but if Viktor Orban speaks for Europe as a whole he might be sensitive to the invasive attempts by Europe to impose an alien culture on more ‘primitive’ societies in other parts of the world. And rather more aggressively than by simply living quietly by another faith as an immigrant.

Hungary has, in recent years pursued a policy of petulant independence, as if modern sovereignty is not diffuse, whilst at the same time obtaining great advantage from EU and NATO membership. You can’t have it both ways.

I hate nationalism. By defining ‘belonging’ we define the ‘other’, and the other becomes the scapegoat and the enemy. It is dangerous.