I’m on holiday, bicycling from Miskolc in North-East Hungary to Timisoara in South-West Romania, largely in order to demonstrate (mainly to myself) that I am still young and vigorous. The first day couldn’t decide the issue, though. After a wrong turning on the outskirts of Miskolc, but stubbornly refusing to retrace my steps, I made a 70 km ride into a 95 km ride and arrived in Nyiregyhaza exhausted, as anyone, young or old, might have been.

The starting point of the trip, at least, is in no doubt, but time will tell if I manage the 362 kilometres (as the crow flies, not as the bicycle rolls) from start to finish. Boredom, weather, fatigue, mechanical failure, puncture, and (let’s hope not) accident may curtail the journey.

I’d planned, in fact, to bicycle through Sub Carpathian Ruthenia, but when I explained to anyone interested (and some who were not) that this is just the inner edge of South-Western Ukraine, and therefore a rather welcoming place, I was told not to, on the grounds that kidnapping, accusations of spying, and other mishaps were almost certain. Never mind that this is the Europhile part of Ukraine and was once Czechoslovakia and Hungary (before the Second World War), and Austro Hungary (before the First), and even, for one day, an independent Ruthenia (see Economist).

I thought it unlikely that I could pedal into a warzone from there (I would have to cross the Carpathians for a start and then go on at least another 1,000 km) but I am heeding their warnings and will stay on one or other side of the Hungarian-Romanian border.

What is there to see?

But I do notice that the region looks more prosperous than when I was last here, twelve years ago. Agricultural machinery is modern, even monstrous, no longer on the old slow human scale. Village houses look less shabby, and Debrecen, capital of Eastern Hungary, has undergone a radical makeover. The great Calvinist Church has been painted, the streets are tidy and lined with elegant cafes, and an impressively modern and quiet tram slithers through the central square. Sleepiness persists, of course, though more tidily. This part of Hungary hasn’t been in a hurry since the revolution of 1848.

One thing hasn’t changed. Stopping for water about 20 km from Debrecen I engaged a kindly middle-aged lady in conversation (to the extent that my declining Hungarian allows). When I told her what I was doing she said ‘Watch out for the cigany’, and in case I didn’t understand this she said it another way, ‘You know, the brown people. They will rob you if you give them a chance.’ Casual racism persists here, as all over Central  and Eastern Europe.

At Keleti Station in Budapest – in the film noir style. 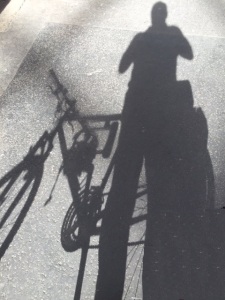