In the summer of 1987 I was sent to Hungary by my employer, as a programmer/consultant, to implement the first full MRP-II package behind the Iron Curtain. Hungary’s economy was then the most advanced in the Soviet Bloc and the Government was eager to improve the efficiency of its manufacturing (the Communist Party still believed that its socialist utopia could yet outdo the capitalist world). My task was to adapt the British software package that I’d been working on in London so that it could run on such hardware and operating system software as the Hungarians had access to.

MRP-II was then a standard for the planning of manufacturing and the resources it requires. An MRP-II system is used to specify the constituents of a final product, the constituents of those constituents, and so on, until there’s a complete ‘bill of materials’ defined for each product The system also ‘knows’ how much time each semi-finished item takes to make, the proportion of components and finished items that will be discarded (scrap and yield), and the man and machine hours involved in the process. 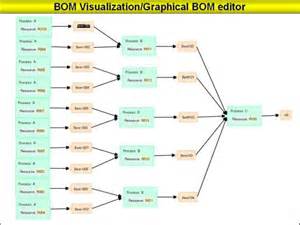 The Videoton factory in Szekesfehervar, 70 km from Budapest, where I was sent to work, was making televisions under license, if I remember correctly, from Samsung. They were modern enough for the time and for the Hungarian market. But what wasn’t modern enough was the computer hardware we had to make the system run on. I doubt the entire mainframe computer had as much memory and processing power as the PC I’m writing this on. CoCom regulations at that time severely restricted the flow of fast computer technology and sophisticated software into the Soviet sphere, and Videoton, a sprawling socialist conglomerate, was known also to be involved in the electronics of weaponry.

MRP-II needs serious computing power. When MRP-II packages are doing their calculations they start at the top of a bill of materials and work down, level by level, calculating at each level the components required, taking account of all orders on which work has already begun, and current inventory levels. The in-memory databases of today would probably do the whole thing in a minute or two, but back then, on an out-of-date smuggled IBM machine the process took hours. And when these calculations were running, all other interactions with the system had to stop.

So we were hugely disappointed when we first ran the process for the assortment of televisions Videoton was producing to find it took 22 hours to complete, leaving, in theory, just two hours for the factory to follow the system’s instructions. Not enough time.

Of course, that assumes that the process would be run each day but that’s best practice. MRP-II ‘idealises’ the manufacturing process, but in reality, customer orders, bills of material, scrap factors, yields and manufacturing times vary, so constant (at least daily) tweaks to quantities and timings are needed.

Well, programming wise, this was the proudest moment of my career. I invented ‘perpetual MRP’. It was clear that there would never be enough time for MRP to run from top to bottom, so I suggested that the MRP calculations need never end, that the system should simply cycle for as long as possible, stopping and resuming according to the time available. Once it got to the bottom of the bill of materials it should start again at the top, picking up changes in order quantities and stock levels at each level as they are found.

So I changed the MRP program so that it could be ‘told’ when to stop (usually 6.00 am in the morning, so that the system would be ready for the first manufacturing shift). When restarted late in the evening, at the end of the second shift, it would simply pick up where it left off. This way it would usually manage three or four complete cycles each week.

Not perfect, but good enough. As you might expect, the system was always out of date, always trying to catch up, but then MRP systems are always, of necessity, out of date. They are a simulation, a model, not a precise prediction or description of the actual production process. We had only a sixpence of a computer to turn our algorithms on and yet we made it work.

After 1989 and the end of Socialism in Central and Eastern Europe Hungarian companies obtained better-performing hardware, and I imagine they could then run a complete MRP cycle every night.

But sadly, the relaxing of barriers to import also meant that the population could buy ‘Western’-brand televisions of better quality and at lower prices, and within a year or so the company was out of business.

It was great fun whilst it lasted.