My partner and I met the most extraordinary girl in Montenegro. She was standing by the side of the road in the middle of nowhere. Bright smile, blue hair, massive backpack and thumb in the air. We were driving from the Montenegran coast to Sarajevo in Bosnia & Herzegovina. It was a beautiful drive in early Autumn sunshine, the road rising gradually through the mountains that separate the two countries. And there she was, a completely incongruous figure.

We stopped and she scrambled into the back seat.

‘Thanks, guys,’ she said in an accent that wasn’t local.

‘Malaysia, truly Asia,’ I said instinctively, as everyone does who watches Sky News go round and round.

‘I suppose you know you shouldn’t board a vehicle when there are just two men in the front,’ I said, ‘though I think you have nothing to fear from us.’

‘You looked ok to me,’ she said, but I don’t think she’d looked very carefully.

She tells us she’s a freelance script and advertising copywriter based in Kuala Lumpur, working mainly for TV companies and specialising in documentaries and travel shows. Travelling is her passion, she says, with or without the wherewithal. This is her second trip to Europe.

‘I’m travelling for six months on 200 EUR. I’ve used up my 90 days in the Schengen Zone so I’m doing all the others. Only I can’t go to Serbia. Where are you heading to?’

SHE’S TRAVELLING ON JUST OVER 1 EUR PER DAY!!

She’s clearly a highly-educated successful, middle-class girl, but with a passion for travel that’s got way out of hand. It’s so feverish that she’s swooping on leftovers in McDonald’s, lurking at the back of supermarkets to pounce on items that have expired or passed their best-before date, sleeping on benches, begging space in strangers’ gardens where she can erect her tent, preferring all of this hardship for six months to just one comfortable long weekend in a three-star hotel.

I couldn’t do it. In fact, I could never have done it. It’s quite astonishing that anyone can, or would, if they actually had the option not to. Even the refugees trudging across Europe have more or can get more than she has.

Many of us think wistfully of such adventures. Or we did when we were young. The open road. Chance encounters. Freedom. But most of us thought and think in terms of plentiful food, warm and clean bedrooms, trains, planes, rented cars, clean dry clothes, and, of course, companionship.

So, I admire her pluck. Hers is a mad and dangerous adventure. I also admire the ease with which she accepts generosity. She’s from the minority Christian Chinese community in Malaysia, and her parents are both pastors, but the way she throws herself on the mercy and kindness of strangers is surely more Buddhist. She isn’t wearing saffron robes, but in other respects she’s like one of those apprentice monks doing the traditional year of begging for a living in the streets of Bangkok, bowl outstretched for a handful of rice – only she’s got blue hair, which they never have – and not, I think, because blue clashes with saffron. 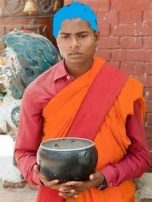 It’s actually hard to accept gifts without guilt and awkwardness. We hate the feeling of  ‘obligation’, even more than we’re glad of the gift we receive.

It’s easier to give, at least if we’re older than 11 or so, and we don’t always expect to get something in return. But it’s far harder to receive without the feeling that some kind of contract has been established that places us under an obligation. Scroungers can do it, of course, but hers isn’t the eyes-averted style of the scrounger, eager to get what he can and scarper. She simply seems to accept that much of the time (though I fear she can’t rely on it all of the time, and she had some hair-raising stories to tell) people will just step forward and help her, and she will gratefully and gracefully accept, without fuss.

To us she seemed like a splendidly worthwhile cause, and in need of protection. She expected nothing from us, asked for nothing, and was quite prepared to fall back on her one Euro a day if she had to.

We drove her to Sarajevo, where she slept at the home of a lady who worked in a café, and the next morning we drove her to a remote spot on the road between Sarajevo and Mostar. She was heading for a village high in the mountains that she’d heard was the prettiest in the country. After that, probably Albania, Macedonia, Bulgaria and Turkey, and then home for a few months of scriptwriting, before, surely, another mad adventure.

She is delightful company, and she’s a brave, hardy, fascinating, determined, and utterly crazy girl. If you see her by the side of the road, don’t hesitate to pick her up.

Perhaps she’s writing a book about the trip. She said she wasn’t, but I wonder.

2 thoughts on “Europe on One Euro a Day”