Every year I spend a week in the late summer bicycling with my friend Caroline in France. This year we climbed Mont Ventoux. In between bouts of mildly strenuous pedalling we talk about mutual friends, about family and the parlous state of the world, and about the books we’ve read over the previous year. We both read voraciously during the week, on trains, at café tables, even whilst picnicking in fields. After all, you can’t bicycle all day.

Caroline’s tastes are racier than mine – she likes books about viral pandemics, Himalayan mountaineering disasters, but also gentle books by wimmin. I prefer books about the construction of railway lines, biographies of philosophers, eyewitness accounts of the Big Bang, and also, from time to time, the masculine fiction of Nevil Shute.

At the end of the week I make a note of Caroline’s recommendations. This year’s contained a wonderful children’s story by Philippa Pearce, author of Tom’s Midnight Garden, one of the most successful children’s book ever published. The Minnow on the Say, which I read over the weekend, is a similarly innocent story of childhood friendship. It’s set in a bucolic English village, and involves the search for the long-lost family treasure that will save a boy and his aunt from genteel poverty. It all takes place in the early 1930s, a time before television, mobile phones and personal computers, when children played outdoors and only came in for tea.

The England this evokes is the one falsely remembered in A E Housman’s poem from A Shropshire Lad:

Into my heart an air that kills

What are those blue remembered hills

What spires, what farms are those?

I see it shining plain,

The happy highways where I went

The Minnow on the Say’s ‘land of lost content’ is one of perfect summers, of gardening, of canoeing in the river, a land where children outsmart their guardians (as long as they get enough cake) to find a treasure that the old and weary have long since given up as lost. There’s no hint of sin – of envy, or of material possessiveness, moral uncertainty, family dissent, marital difficulty, no jostling for dominance, no casual cruelty. There’s the residual sadness of the recent war, but there’s no sickness, no anger, no accidental injury, death, and, of course, there’s not even a whisper of sexuality. There are no foreigners either, and no refugees, except those from the city (Birmingham and London are sneered at as hell-holes). This is a perfect world and the novel’s characters are perfect adults and perfect children.

Philippa Pearce’s story telling is engaging. As in adult mystery novels the clues are generously scattered for the reader to find, and there are pages where you’ll have your hand up (‘Miss! Miss!’) to give the answer, whilst the characters scamper on for a few more pages in ignorance.

This is the world of childhood that what we all remember, or retrospectively construct, and the tug of nostalgia is powerful. I seem to remember long summer afternoons and not a worry in the world. Outdoor games, swimming in the river, bicycles, and lots of cake. I never pulled the legs off spiders. Well, only once or twice.

Did William Golding get it wrong, then, in Lord of the Flies, his story of the savagery that inhabits the unsupervised child, or Dennis Potter in Blue Remembered Hills, where children (played by adults) do cruel and unfeeling things, unconstrained by understanding. Are these two writers right to tear off our rose-tinted retrospective spectacles? 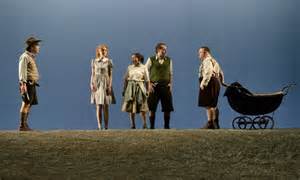 Children’s fiction, in the main, is as much about how the world might be as adult fiction is. It isn’t true. If anything, children dream more wilfully and with more hope, ignorance and innocence than adults. It is myth as much for the eleven-year-old as for a middle-aged man. Although much children’s fiction is heavily and deliberately, didactic, the best of it merely amplifies hope. Tastes change with age. I used to enjoy C S Lewis’s Narnia stories, but for the most part they strike me nowadays as priggish and overly preachy. Philippa Pearce gets it right.

Oscar Wilde wrote, “The good ended happily, and the bad unhappily. That is what Fiction means.” Fiction is deliberate, generous distortion.