The excitements of life in Prague come thick and fast. Yesterday I took part in a vast survey of passengers on the Prague Metro. It had been trailed for days by notices at the entrances to Metro stations all over the city in both Czech and English and I’d been looking forward to it with keen anticipation.

I’d expected a questionnaire, but when it came to it, it was a lot easier than that. All we had to do was to carry a small slip of paper from origin to destination. The only requirement was that we should not fold it or crumple it (‘crumple’ is a wonderful word to find on an official document in a non Anglophone country) .

Teams of young volunteers were there to give out the slips at the point of departure (though, not, as I discovered, to explain in English what the survey was for) and other teams were there to collect them at the point of arrival. It was all very politely and graciously done. The entire team must have numbered many hundreds across the 54 stations of the network. The paper slips themselves were reminiscent of the punch cards we used in the early days of computing and presumably destined for machine readers. 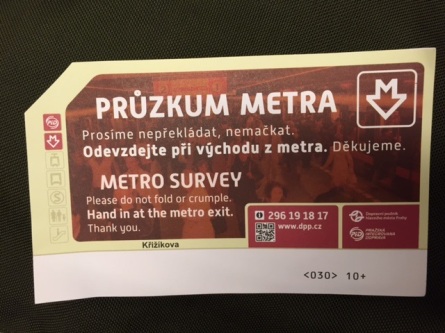 I’d thought I’d get a chance to share my thoughts on colour schemes, on the rule that says you may not eat or drink, on public transport, and to commend Prague’s Metro culture which, unlike in other cities, sees the young give up their seats to older travellers. I was sharpening my ballpoint pen in eager anticipation.

But it seems they were after just one simple thing, where each passenger was travelling from and to. That’s such a basic and unsophisticated fact, and it seems so counterintuitive that it should be obtained only in this simple and crude way. It feels as old-fashioned as Theseus paying out Ariadne’s thread as he enters the Minotaur’s Labyrinth, but it’s hard to think of any better way.

As far as I can tell, this little slip of paper bears very little information in machine readable format. Origin probably. You’d think that perhaps there would be a time stamp too, but I don’t think there is.

But what will they do with this information? What benefit derives from knowing what journeys passengers are taking? Will it determine the frequency of service or does it help traffic planners decide whether to invest in alternatives such as buses, trams, cycle paths or roads? Perhaps we will never know.

I looked in vain on the website listed on the paper slip. The English language version, at least, doesn’t provide any clarification of purpose.

But it was lovely to be doing something civic, even if in complete ignorance of its purpose, and it was lovely to see how seriously the citizens of Prague were taking the task. I only saw one discarded slip on my 20-minute journey from Ceskomoravska to I P Pavlova. It reminded me of the wonderful sense of civic virtue that characterised Republican Rome. I’m sure the Romans would have tucked their survey slips into their togas with an equivalently gracious sense of responsibility whilst taking a chariot from the Forum to the Field of Mars. 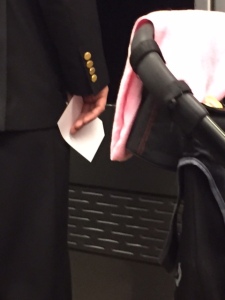 One thought on “Taking Part – Civic Virtue on the Prague Metro”