I usually start the day in the laziest imaginable way, first, by not getting out of bed for at least half an hour after my alarm has sounded, and then by watching BBC Breakfast. I’ve recently acquired something called IPTV and so the BBC’s UK-only channels can be piped directly to the TV in my sitting-room. 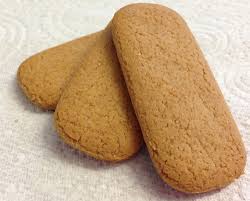 Breakfast television is pap, a cocktail of undemanding topics and mild jocularity. It goes well with a hot shower, a cup of tea and a biscuit called a Morning Tea Finger (see above). But my ears pricked up the other day when the subject of religion came up (you’d think that would be no-go before about lunchtime). It was prompted by a report that had just been published by some august institution, though I can’t remember which (you see, I don’t really pay attention). Apparently, more than half of the UK’s population now describe themselves as non-religious.

‘Worse than that,’ one of the invited commentators said, ‘Fewer and fewer are going to church, temple, mosque or synagogue.’

I would think it’s cause for celebration, myself. At least for those of us, like me, who can’t bear the posturing and utterances of most religious figures (consider the sanctimonious antics and unctuous, oleaginous tones of Justin Welby, the Archbishop of Canterbury). It’s all hocus-pocus to me, nonsense, superstition, and it’s socially retrogressive too. I can’t understand how anyone can be taken in by it.

I describe myself as ‘culturally Christian’. That’s not something I can undo since it’s the context I was born into, but I’d as happily be ‘culturally Buddhist’, or ‘culturally Moslem’, ‘culturally Hindu’ or ‘culturally Jewish.’ I don’t know that these ways of being would actually be very different from one another. Most religions recommend compassion as a good way of getting started. But I’m not sure about ‘culturally Jehovah’s Witness’ since it’s not so clear to me what that would mean (I certainly wouldn’t reject blood transfusion or refuse the companionship of non-Witness folks). If religions were biscuits, the Church of England would certainly be the Morning Tea Finger. It’s a relatively tolerant and innocuous biscuit.

I am all for atheism. I enjoy ‘religious’ moments at the top of mountains, in the naves of great Gothic cathedrals and in the middle of great symphonies, just as anyone does, but let’s not let moments of contemplation and awe get churned into dogma. Frankly, I can’t understand how you can ever get from what one might loosely describe as the ‘spiritual’ (without any other-worldly implications) to a fat book of rules such as the Catechism.

But religion doesn’t necessarily place my friends and family quite beyond the pale, though I find it a challenge, the more so when it affects their opinions and actions. For example, there’s a branch of my family that’s staunchly Jehovah’s Witness and they are the kindest of all. I have a niece who is fanatically Roman Catholic and a nephew who is falling prey to Russian Orthodoxy but I won’t entirely reject them. Frankly, though, it’s hard to know what to do or say. There’s a part of me that insists they must be stupid to believe the nonsense that they do, and yet they’re not stupid. And some of my best friends are religious too (well, a small few of my friends).

It wouldn’t trouble me at all if I didn’t also believe that nonsense, in the long run, does harm.