Some of my best friends are gardeners and I suspect they have a inkling of a paradise that I haven’t yet perceived. They are (the four that I’m thinking of) utter paragons of patience, in balance with nature, creative, knowledgeable, and humble in their understanding of and acceptance of human limitations. Or, at least, they’ve started towards that path. Gardening, I suppose, is partial dominance, partial submission, the perfect spiritual exercise.

My own fingers are pink, not green. I have a sense of when my houseplants are thirsty, but I can’t do any of the outdoor stuff. Perhaps it’s because I was never taught. My father loved both gardening and fishing (another exercise in tranquil, and usually unproductive, inactivity) but he loved order and control more than untameable natural growth. In his frustration at the wilfulness of nature he would usually pave the whole thing over with concrete slabs.

Nevertheless, I envy my friends’ ability to converse in horticultural Latin (one of them will shortly write a book on the subject), their assiduous visits to Great Dixter and Sissinghurst (where they might surreptitiously snip), their attendance at the Chelsea Flower Show, their membership of the Royal Horticultural Society, their trays of seedlings, their trowels and muddy boots. I do not belong, but I dream that one day, perhaps, even I might retreat from the city and the noise, to follow the advice of Roman poets and French satirists and cultivate my garden.

This tantalising other way of life is on display at the Royal Academy in London at an exhibition called Painting the Modern Garden – Monet to Matisse. It’s mostly Monet (1840-1926), or, rather, at its best it’s Monet, the last room given over to a triptych of Water Lilies painted by the artist in his last years, and never before seen together in Europe at a public exhibition. Refusing to leave the garden he had created and painted at Giverny, even as the Germans advanced into France, he stayed and continued to plant and paint. His was a creative double act (first the garden and then the painting of its beauty) and at the end of a long life, despite the horrors of war, he chose to paint only his garden, with ever greater concentration and abstraction, in consoling celebration of what he valued most – the human sense of beauty. 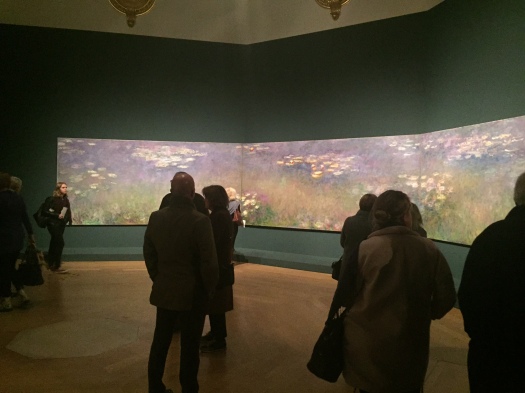 On a January day in London there’s no better solace I can think of than this exhibition. Whether they are Pissaro’s vegetable plots, Van Gogh’s squirming shrubs, or Klee’s geometric distillations, these paintings are all glimpses of another, usually better, life.

I visited the exhibition with Caroline, one of my four keen horticultural friends. Her knowledge is encyclopaedic and she soon pointed out an error on one of the captions to a Monet.

‘That’s not a something iris,’ she said. ‘It’s a something else iris.’ (I can’t reproduce the Latin terms.)

Gardening is her passion, so it was with some difficulty that I prevented her from making a correction to the caption, or the painting. So much for the spiritual plane.

When a man sits down in front of a garden, or strolls around in it, he steeps himself in delight. Because the garden is a paradise where a garden owner and a landscape gardener share the same dream in their common culture. Man first made a garden to try to produce a paradise in this world. The garden seems to be a paradise of the other world, somewhere out of sight.

Masaaki Noda, Dialogue with a Garden