Why would two highly-educated, cultivated British men drag themselves half way across Buenos Aires to visit a cemetery?

Obviously not because Eva Duarte, otherwise Eva Peron, or Evita, might be buried there. I have absolutely no interest in celebrities, living or dead, and loathed the Andrew Lloyd Webber musical (though I did enjoy seeing Budapest double for Buenos Aires in the film version, when I wasn’t cringing at the utterly ghastly antics of Madonna). Our visit,, naturally, would have much more to do with an academic interest in funerary customs and monuments. Indeed, to bolster that claim, I should point out that I once won an essay prize, at the age of sixteen, for an article on the Municipal Cemetery of Milan, a gloriously extravagant graveyard as different from an English one as HIgh ‘Smells and Bells’ Catholicism from plain bread-and-water Puritanism. And I’ve spent many happy hours in the Cities of the Dead in Cairo, where some of the most wonderful medieval mosques are to be found. I’ve also crawled through the catacombs in Rome. And I’ve twice visited the grave of Igor Stravinsky, my favourite composer, on the cemetery island of San Michele in Venice. I have a history, and of course I will have a future too, as we all will.

In any case the cemetery was conveniently located on the way back to our hotel in Palermo Soho, the ‘in’ suburb of Buenos Aires where all discerning tourists now stay, and it was just the way to end a joyous day – a suitably cautionary contrast to the fun of the flea market in Santelmo (quivering to the music of Astor Piazzolla) and the grandeur of Plaza de Mayo.

It wasn’t all that easy to find, though. An elegant middle-aged lady with perfect English found us poring over our map on a street corner in upmarket Recoleta.

‘We’re looking for the cemetery,’ we said.

‘Ah, you’re going to see the grave of Evita Peron,’ she said.

‘Then why would you go there?’ she asked. ‘Half my family is buried there, so I really can’t imagine going there for pleasure.’ She seemed to shudder.

‘Well…..’ and then I spoke eloquently about funerary customs and monuments.

We moved on rapidly to happier topics, and in no times we were chattering about Leicester, where her son-in-law plays top-league Rugby, and then, of course, about the awfulness of the English weather.

The cemetery, when we finally got there, was indeed interesting. It reminded me of Pompeii. Long streets of small houses, all of their inhabitants dead. And it was a conveniently condensed architectural microcosm of the city – neo-classicism, Beaux-Arts, art deco, and even a hint of modernism about some of the more recent dwellings. 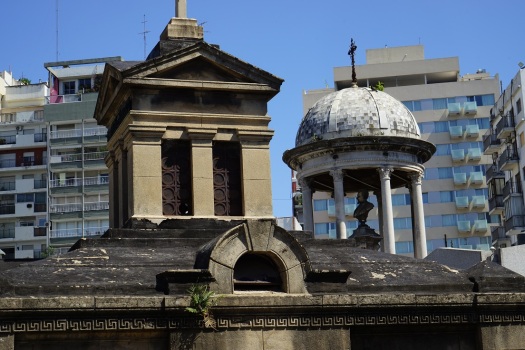 Our guidebook mentioned that Evita’s grave was amongst the most humble. She was, after all, a determinedly humble megastar, and never forgot her roots. Even when her husband attained the highest office in the land, she was never happier than when handing out shirts to the shirtless and bread to the poorest of the poor. But we weren’t looking for her grave anyway.

There weren’t very many tourists, so we kept coming across the same groups as we criss-crossed the maze of cemetery high-streets and low-streets. None of them was looking for the grave of Eva Peron, except for an American couple (he, a plastic surgeon, perhaps in search of body parts for reconstructive surgery) who wondered, idly, where her grave might be found. 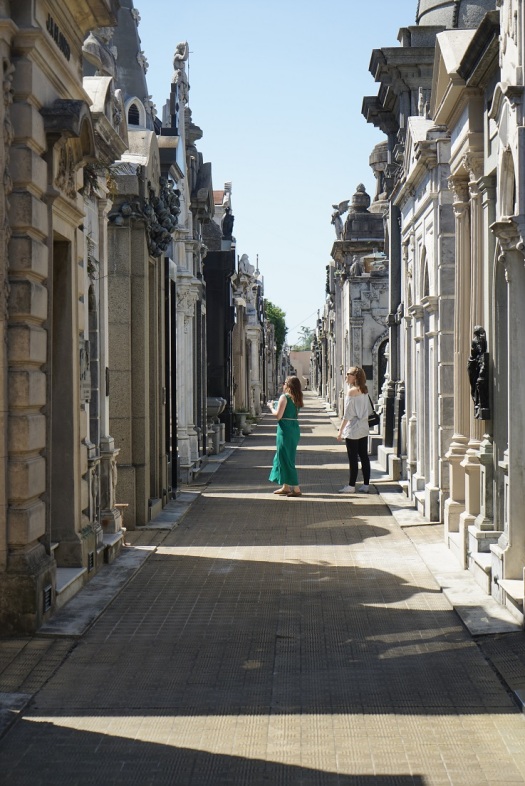 ‘Well, since we’re here,’ they pointed out, ‘It would be silly not to see it.’

‘We’re not looking either,’ I said.

We wandered on, glancing now and then, with idle curiosity, at the family names adorning each mausoleum, and finally found our way towards the exit, entirely satisfied. We came across the Americans again, also just about to leave. None of us had noticed it before, but there was actually a very helpful map that showed exactly where Evita’s grave could be found – number 88 in quadrant C7.

So we did, and it was thronged with Asian tourists. Pointless of course, if you have no interest in celebrity, but since we were there.

One thought on “NOT in Search of Eva Duarte”