You can swim with all sorts of creatures, if you’re adventurous, not just dolphins. Frogs, piranhas, penguins, snakes, oligarchs, mothers-in-law, all can be fun in their various different ways. In Brazil you can swim with rodents – but not just your common or garden rat, rather, the very largest rodent in the world – the capybara.

Here’s a family of three that I swam with yesterday. 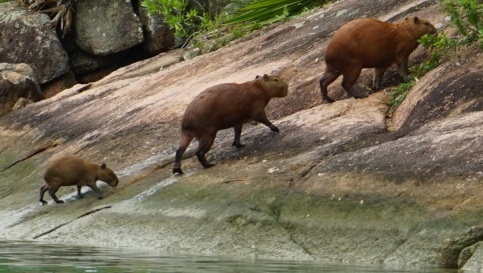 The capybara is a delightful animal, related distantly to the guinea pig (which, by contrast, makes a loathsome and unrewarding pet – I know). It is a relatively tame and social creature inhabiting much of South America. Its diet is entirely vegetarian, so it presents no danger to the bathing human. It swims and wallows well, generally in order to cool itself in the heat of the midday sun, but on the whole prefers fresh water to salt. Wikipedia claims they run as fast as horses, but I would like to see that put to the test. They make pleasant pets, but, sadly, are sometimes hunted for their meat and skin (the best handbags are fashioned from capybara leather). 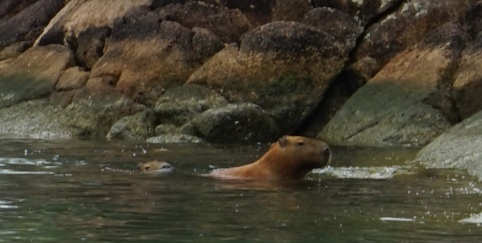 It is delightful to be near animals from time to time, and to see so much of ourselves in them. Cats and dogs, of course, have attuned themselves over many millennia to the behaviour of humans, but the capybara, though it has led a less privileged lifestyle, nevertheless displays recognisable emotions, if not thoughts. You can’t help but believe it’s sometimes having fun, sometimes behaving warily as you paddle up close,  sometimes ‘wondering’ whether to flee, and so on.

When I studied animal behaviour in the 1970s, behaviourism was the orthodoxy. The ‘anthropomorphic’ attribution of thoughts, feelings, attitudes, and beliefs to animals was anathema, and liable to earn you ridicule. To my mother, on the other hand, who talks incessantly to cats, it seems only natural that animals should have characters, even a moral life.

I take a middle position. There is much that we share with animals. ‘Baby’ capybara, in the picture, frolicked in a way that resembled the joyous frolicking of humans, and I see no harm in carefully attributing feelings to animals. They do not have language, so I would stop short of attributing ‘thought’, but I believe we detect feelings, emotions, and attitudes in our human peers in very nearly the same way that we do in animals. We share so much with them, even if we don’t share language and the more sophisticated forms of mental life. But, unlike my mother, I do not see animals as morally responsible for their actions.

By chance, I watched Miss Potter the other night, a film in which Renee Zellweger plays Beatrix Potter (as a more intelligent corset-clad Bridget Jones), whose charming anthropomorphic children’s stories are still  popular after more than a century. Perhaps Darwin had whispered in her ear that we are not so different from the animals, after all.

She never knew the capybara, but I think she would have loved to have painted one (The Tale of Cathy Capybara, perhaps) in a bonnet with a wicker basket on her way to do some shopping. or, perhaps, more appropriately, in swimming trunks.

2 thoughts on “Swimming with Rodents”