Many years ago I undertook a short consulting assignment in Kazakhstan on behalf of a small oil company based in London. There’s almost nowhere I wouldn’t visit at least once (except, perhaps, Baghdad) and I looked forward with great excitement to the trip. The oil company’s administrative offices were based in Aktobe, a town northeast of the Caspian Sea on the imperial-era Trans-Aral railway line. The oil field itself, I understand, was a few hundred miles southwest across the steppes towards the Caspian.

It wasn’t easy to get there. I flew from Prague through Moscow, and returned through Astana, Almaty and Istanbul.

I was invited to visit Aktobe to find out how the company was using SunSystems. Infor’s SunSystems is a British financial accounting system that, better than almost any other system of its type in the world, enables both local statutory accounting and corporate financial reporting to international standards. When it comes to remote financial control of an organisation, and Aktobe is nearly as remote as you can get and still find a four-star hotel, there is no better solution.

The company had just bought an oil field in the north of Russia and was considering implementing SunSystems near Archangel. They’d heard about us through our Moscow office and the British financial director seemed to place some trust in our company (LLP Group), or at least in me, probably because I am British too. How better to start with SunSystems in Russia than to look at how the company was (successfully) using the system in Kazakhstan?

Aktobe was built in imperial times, but bears all the hallmarks of a mid-sized brutal Soviet city – a simple grid of crumbling concrete apartment blocks, and wide wind-swept boulevards decorated with crude socialist realist monuments. In fact the city is less Russian now than for a hundred years, many of the Russians having left after Kazakh independence. A vast new mosque reflects the revival of local religion and culture, but in all other respects the city might have been anywhere in the former Soviet Union. 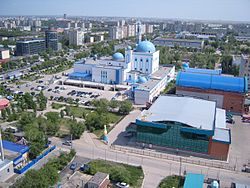 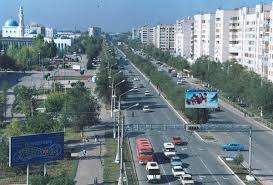 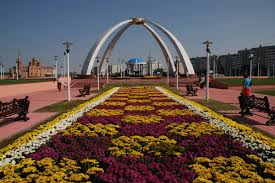 It was no surprise to me, though, to find, when I got to Aktobe, that my client’s accounting team were using 1C. Many companies keep two sets of books, one in 1C and one in a ‘Western’ system such as SunSystems. Sometimes they build a bridge between the two to ensure that the systems reconcile and to avoid wasting time in entering transactions twice. There’s often a debate about which system should be the ‘primary’ system, but I won’t bore you with that debate here.

The problem is that most local accountants find ‘Western’ systems uncomfortable and effortful. Whilst it’s perfectly possible to use only SunSystems in Russia (see SunSystems in Russia – Perfectly Possible for the Determined Amongst Us ), it’s less easy to derive statutory reports from SunSystems than from 1C, and all local accountants owe their primary loyalty to the state. This is entirely understandable. They are personally and criminally liable for their mistakes.

It’s not often, however, that hostility towards a ‘Western’ system is overt. The great surprise in Aktobe was that my client’s accounting team weren’t using SunSystems at all. They hated it, and told me so. They were sending their monthly financial reports to London, ostensibly derived from SunSystems, but in fact derived from 1C with a few adjustments here and there. I looked at the SunSystems ledgers and the latest journals were posted months and months earlier.

Remote control isn’t easy. As LLP Group has grown over the last twenty years I’ve seen how hard it is to maintain standards, whether they are ethical standards, HR standards, accounting standards or consulting standards. There’s no substitute for frequent visits, frequent training, frequent fraternising and frequent forensic investigations into what’s going on. Saying that something ‘must be so’ from a distance without ensuring it’s actually so, is a waste of time. It’s very hard to maintain remote control of a very faraway place, and it’s easy, in a faraway place, to deceive someone at headquarters whom you hardly know.

The client was excited by my findings and was ever more determined that they should abandon 1C in Aktobe, and that they should use SunSystems for their new oil field in northern Russia. They were properly alarmed by the fact that their financial statements, the basis for their stock-market valuation in London, were produced without much accountability, in Excel.

But then, just a few weeks later, another company bought them, and all projects were off. I doubt that the team in Aktobe ever posted another SunSystems journal.