We hope to release systems@work Version 6 in the coming days/weeks. Today was the first day of the gradual release process – a first release of a pre-release version to me and to a few of my colleagues.

The next step will be the upgrade of our LLP Group system on Friday, so between now and then we must iron out the most alarming and noticeable bugs.

But I’m already pleased with what I see.

My first step, on receiving the new version this morning, was to upgrade a standard time@work demonstration database. The new Home Page looks like this:

We’ve narrowed the page header to allow the display of more transactions. We’ve arranged all immediate actions into a To Do panel and an Approval panel, we’ve provided a Shortcuts panel, and we’ve arranged the functions of the system into a tab strip.

It is easier to work with and it looks more modern.

There are also new ‘Static Data’ reports that enable you to list Employees, Clients, Projects, Tasks and Analysis Values, and you’ll be able to use Ledger Export (and Task Scheduler) for exporting such data to external systems. 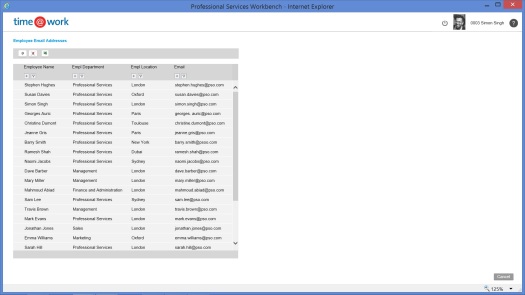 We’ve also revised the way in which destination email addresses can be defined for invoices. You may define one or more roles (such as Project Manager, Client Project Manager, and Company Accountant) as the default recipients, and also allow the editing of the recipient list at invoicing time.

During the next forty-eight hours we will correct the most obvious problems, upgrade our own systems on Friday, and then prepare an official release for mid- to late July.

There’s still a lot to do.