I bicycled today from Kecskemet to Szeged. I took a wrong turning in the morning and found myself cycling across fields (see dog leg below).  But I never turn back, in the belief that there’s always a way through. Until, one day, of course,  there won’t be. But today there was.

Kiskunfelegyhaza made an unpronounceable lunch stop, and I met a delightful Dutch couple who were bicycling the border of the Roman Empire. They had a book about it and had a splendid device that attached it to the handlebars. Trust the Dutch to be so well prepared.

Szeged, three hours later, announced itself too early, raising hope in my heart and a desperate last gasp vigour in my legs, when there were still seven kilometres to go. And then there was another sign, and then another, and then another two, one of them a socialist realist monster. But the tease is worthwhile.

Szeged is definitely worth persisting with and crossing fields for. It’s the most elegant and relaxed city in Hungary, home of paprika and salami, and other agricultural products, and home to one of the great universities of the country. It’s changed hugely since I first visited in 1987 and consumed a Government-manufactured gin, in a very shabby bar, that had a dampening effect on me and my friends for at least two weeks.

I’m staying at the Tiszavirag Hotel, where I stayed last year on a hideously rainy day in June. It’s one of the most wonderful hotels in the country, perhaps the world, and serves the best food in the country. If I were not a driven person, I would stay another day or two. But got to get on.

Although you might have difficulties in finding an excuse to visit this city (though they did a Flying Dutchman in the open air a few weeks ago), this hotel makes it worthwhile. I’m afraid I’ve reached that stage in my life, when the hotel is as important, even more important, that its location. 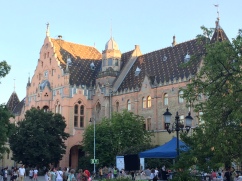 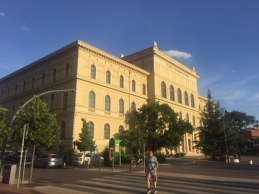 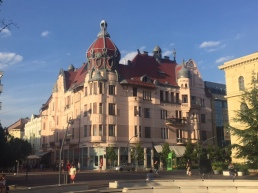 Tomorrow, I bicycle towards Novi Sad, but more importantly, it’s John Chilcot’s day. With any luck our former Prime Minister, Tony Blair, will have been savaged by teatime and in handcuffs by dinner time.