I’ve collected all sorts of odd things over the last fifty years, including, when I was a very young child, a series of twelve seed catalogues produced by a company called BOCM. I never read any of them, but I enjoyed possessing them. Collecting them offered a kind of emotional security and control, an illusory feeling that the world might be manageable. I still enjoy and need this feeling today as I gloat over my things. Not for me, I think, a spiritual and immaterial life in a monastic cell, unless I could start a collection of monastic paraphernalia.

I also collect those tiny shampoos, conditioners, lotions and soaps that you find in hotel bathrooms, and I have boxes and drawers of them at home. I’m oddly reluctant to use them. If it comes to ‘having your cake’ or ‘eating it’, I’d always rather ‘have’ than ‘eat’. I haven’t yet catalogued the collection, nor have I arranged them by colour, purpose, quality, brand, or location of origin, but I might yet turn to that in my retirement. No doubt Sigmund Freud would have a few things to say about collecting, but fortunately he isn’t around to ask. In any case, he wasn’t exactly immune from the craving to take control of a small portion of the world. He collected and catalogued neuroses.

I’ve collected the ordinary too – stamps, coins, books, rugs, paintings, DVDs, CDs, etc. – but they’re too commonplace to be interesting for long. But I also enjoy the mad collections of others. I know a man who collects erasers (or rubbers as we call them in the UK) and I’ve visited some very odd museums – the Museum of Catering and Commerce in Budapest, which has a glorious collection of Soviet-era shop fittings, the Police Museum in Prague, where you can gaze in wonder at a cabinet full of poison pens, and the Museum of Humour in Plovdiv, which contains a remarkable collection of jokes, from one-liners muttered in bars in Bishkek to the whole of Joyce’s Finnegan’s Wake. Last week I marvelled at a motley collection of Allied and Axis military equipment picked up from the battlefields of Crete, and presented, with absolutely no historical context, in a private museum somewhere between Chania and Hora Sphakion.

But you don’t have to take possession of things in order to collect them. Train spotters don’t possess the objects of their enthusiasm in any literal sense, though I presume they derive a fleeting sense of an ordered world from what they do. Nor do spotters of bus stops come to possess the bus stops they spot.

Which brings me to a book I recently bought with the irresistible title,  Soviet Bus Stops, a collection of photographs of Soviet ‘bus pavilions’,  from all over the evil empire, from Kazakhstan to Moldova, by way of Lithuania and Armenia, perhaps even from places where busses never stopped (or started) at all, Soviet planning being what it was.

The photographs were taken by Christopher Herwig, who travelled tens of thousands of uncomfortable kilometres to compile his collection (and I doubt that the hotels he stayed at offered those little bottles of shampoo). It’s an utterly fascinating book and you’d certainly find yourself looking at it more than once. Who would have thought that bus stops could be so interesting, so varied and so expressive?

But of course public art always had a special place in the Socialist world (consider the Moscow Metro), and the book’s several prefaces explain how in the last decades of the Soviet era, architects and artists, frustrated by the billions of strictures applied to large scale structures, found individuality and expressive solace in the smaller scale of the bus stop. 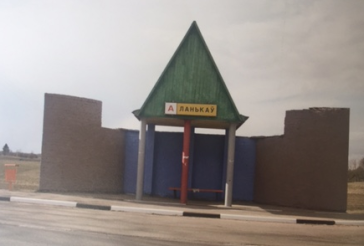 In fact, designing a bus stop was something every architect in the Soviet world learned how to do. It was a standard exercise for design students across the Soviet world. Many built nothing larger. For some the bus stop offered a single chance  to say whatever they had to say about the world.

Think about it. What must a bus stop do?

How many of those criteria does this lamentably simple non-Soviet bus stop meet? I wouldn’t even know on which side the queue should form.

Never mind that the bus rarely arrived on time, and was a rickety old Soviet model when it did. If you were one of the People you probably didn’t own a car, so a bus pavilion was where you spent a good proportion of your waking life (the rest of the time you spent queuing outside shops). So you were grateful for something a bit out of the ordinary to wait in or at, something that would inspire you to come back and wait all over again.

I’ve seen some of these myself. I was in Moldova a year or two ago and came across a splendid bus stop just outside Cahul. It was just like the ones in Herwig’s book, and far nicer than any other building in the village. I stopped and photographed it but didn’t go on to collect any more. I didn’t then know that the bus stop can be a collectible item.

But hats off to Herwig. I can’t recommend his book too highly. Add it to your collection. 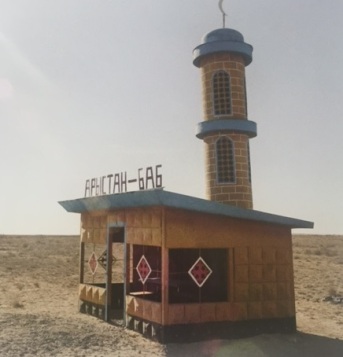 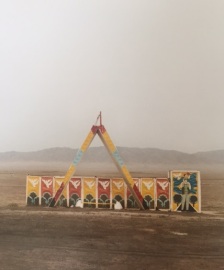