Tourists abroad are invisible to each other, the more so the more they share. We wave with gracious condescension at workers stooping in the rice paddies, and at families gathered on the doorsteps of their houses to see us pass by in our pony and trap, but if there’s an obvious tourist on the pavement we simply do not see him or her.

It’s odd, really, given that they might be just as nice and interesting as we are. They’re more likely to speak our language, too, and much more likely to have shared experiences to chat about. I suppose we go on holiday to become, albeit briefly, someone else. We’re not eager to be reminded that we’re just like all the others who are doing exactly the same, and failing, as we all must.

These are realistic but ungenerous thoughts, and here are more of them. In Bali you can also see foreigners on a kind of spiritual quest. They’re sometimes clothed in diaphanous rags, they waft about on clouds of burning incense, and from time to time they utter blessings of a Hindu or a Buddhist nature with a placid but effortful smile. I am embarrassed by these spiritually pretentious antics. It’s so 1970s. The hippy trail. They bathe with the locals in the spiritually cleansing waters of the Tirta Empul temple and, as our guide points out, they do it all wrong. I cringe. 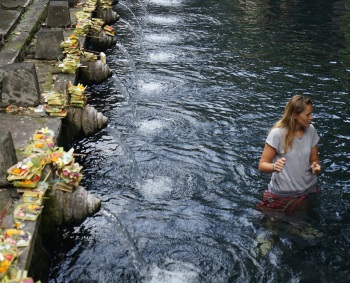 I’m not at all inclined to look for myself. I’d rather be looking for others. That’s usually quite difficult enough. Or is it a case of putting on your own oxygen mask before helping others? How I loathed that self-obsessive film about a middle-class woman finding herself – Eat, Pray, Love. I left the cinema to vomit even before the credits rolled.

I can’t help feeling that when we look for happiness in the traditions and rituals of other cultures and religions, ones we’re not steeped in from birth, we’re clutching at straws, and other people’s straws to boot. Better to come to terms with who we are where we are. The other place is nearly always the wrong place. And especially if our approach is entirely superficial, as when we’re just taking a holiday in Hinduism, or Buddhism, we also stand accused of simply ‘consuming’ a culture or religion for our own convenience, in the same way that we enjoy a curry, or a sweet and sour pork from time to time.

Bali, it seems, is all about karma. I’ve certainly never seen anywhere more intent on holiness. The population are largely Hindu, and the island is covered in ornately carved temples, many a thousand years old and more, some recently constructed in the gardens of every home. On every threshold there’s a neat package of food laid out for the Gods, something like an airline salad without the cling film. I stepped on one accidentally as I made my way into a restaurant. Not good karma. 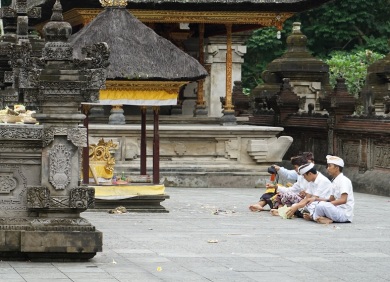 And Here in Bali, tolerance, love and peace abound, and put our petty concerns, mean-spiritedness and embarrassments to shame. I put my point about embarrassment to our guide as we watched the foreigners sluicing themselves with holy water.

‘Aren’t you embarrassed by what they do?’ I asked. ‘What can they really know about your religion? And as you said, they’re getting it all wrong.’

‘No,’ he replied. ‘If they come here with the right feeling, then that’s all that matters. The mistakes aren’t important.’

As we left the temple there were screams coming from the sluicing pools.

I’d have to scream for years and years to rid myself of the embarrassment, the bitterness and all that bad karma. Better get started at once.