I first came to the village of Shiroka Luka, high in the Rhodope Mountains of Bulgaria, by accident, on a walking holiday, in 1988. Bulgaria was then a more or less functioning socialist economy, if not the socialist paradise it had set out to become forty years earlier, and the village thrived as an agricultural community and as host to four substantial state institutions – an orphanage for children and teenagers, an orphanage for babies, a specialist folk music school for instrumentalists, singers and dancers, and a primary school for children from the village and the orphanage. There were jobs to be had in these institutions as well as in the fields and woodland that surround the village.

Even so, the population of the village and the surrounding area was lower than it had been a hundred years earlier. Subsistence farming and the simple rural life were even then less tempting than decades earlier, when villagers rarely left the valley, dressed in the local colourful styles and played the bagpipes and flute.

Since my visit in 1988 the population of the village has halved. Farming in the high meadows above the village has all but ceased, and this year, for the first time, not a single cow can be seen ambling in the early morning from the village to the nearby pastures to graze, and back again in the evening. Even fifteen years ago, cattle were housed in stables beneath the villagers’ houses, and in the evening you would see each cow break away from the herd to find her own way home as the cowherd led them through the village square. Villagers, presumably, milked their own cows and made their own cheese and butter.

You would think, looking at the village, as I have, over the last few days, that it still thrives, albeit in different ways. The village square is lined with restaurants and craft shops, selling Rhodope rugs, slippers and bells. But this occupies the village only for a few months each year. With these four institutions in decline or closed there is nothing to keep young people here, whilst in Plovdiv and Sofia there are jobs, and modern life and a more comfortable way of getting through the winter. However sentimentally we might regard the old way of life, we would be the last to choose to live it. 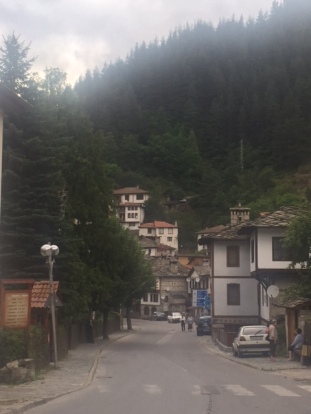 There’s an idea now that the orphanage might become a special centre for artistically gifted children, or a centre where the arts might be employed to inspire ordinary children – I’m not sure which.  All of this stems from the work that my friend Elena Panayotova and her colleagues have done through the Children’s Theatre School, but I can’t see how this could be enough to keep the village alive, or where the money might come from to finance it. It is a desperate, but a barely plausible hope.

It is, of course, sad to see village life, indeed a way of life, decline. But Shiroka Luka is too far away to serve as a pretty weekend bolt hole for the middle-classes of Plovdiv and Sofia, and, in any, case these are not yet sufficiently prosperous cities. What’s happening here happened fifty years ago in the United Kingdom and most of Europe and no one can stop it happening here. Things change.

I’m in the village of Shiroka Luka, high in the Rhodope Mountains of South-Central Bulgaria (see blue spot below), for the annual Children’s Theatre School, which LLP Group sponsors.

I first came to the village, by chance, in the late Spring of 1988 on a walking holiday with a friend. The village hosts one of the two national folk-music schools which the State (then still a Communist state) supported. We heard music, made some enquiries, and then accompanied the students, in a terrible old bus, to a local village for a concert. How we got back to our hotel, some twenty miles distant, is now lost in a haze of rakiya, a poisonous local fruit brandy.

Ten years later, long after the Communist regime had given up the ghost, my friend returned and discovered a folk-music school in grave decline, but worse, an orphanage (which we hadn’t seen on our first visit), in extreme distress, with insufficient money to feed and clothe its 70 children. My friend then started a charity, supported by other friends all over the world, that provided food, clothes and other necessities. Especially in the early years, this made a vital difference to the lives of hundreds of children, though now, seventeen years later, the situation has improved greatly and the distress, if it remains, is less obvious and less acute.

Some years after my friend’s return, and inspired by his work, I persuaded my business partners and a group of actors, musicians and theatre directors from Sofia, to run an annual theatre school for children from this and other orphanages in the region. This year is the thirteenth year. But today, I and two friends, took a day off from the chaos of the children’s rehearsals and drove to the Eagle’s Eye, a vantage point high above a limestone gorge near the Yagodina Cave, almost on the border with Greece. You can reach it only in the back of a hired off-road vehicle, and for the faint-hearted the journey is a strain. However, the view of the meadows, mountains, villages and deep gorges justifies the mild anxiety.

Our guide was Ilie, by chance a ‘graduate’ of the orphanage in Shiroka Luka. Through an interpreter I asked him about his life then and now. His is a typical story. Ilie still doesn’t know where he was born, or even whether he has brothers or sisters, and the law doesn’t permit him to find out. This is an ever present sadness. He remembers the worst times as the mid-1990s when there wasn’t enough food or fuel to heat the orphanage, and, still to his surprise, no one in the village offered help. He confirms that life for ‘orphans’ is incomparably better now. In fact, there are now only a few orphans in large institutions, the social services department having adopted the European norm of fostering children. It’s hard on those, though, whose early life spans the old and the new systems, since, he says, the children find it hard to adapt to family life after the hurly-burly of communal living, and most long to return to the orphanage.

Ilie is in his thirties, and I asked him about the transition from social care to complete independence. For him this came, as it still does for today’s orphans, abruptly, at the end of secondary school. He tells us it was hard to get a job, and that the stigma of the orphanage hangs over him and his orphanage friends still. There are no jobs in this region, there’s no affordable accommodation, and support from the state is provided only for a few months.

Life may be less hard than it was, but tragedies still occur. During the winter of 2013-2014 a friend of Ilie, penniless and homeless, froze to death on the streets of Smolyan, the regional capital. It is hard to understand how this can happen in Europe. There is much still to do in Bulgaria.