‘What’s the news in….. ?’ may be an unexciting opener, but it’s often the first question I ask when I arrive at one of our far-flung offices (LLP Group). It’s an open-ended question, and a good conversation starter, but I also ask it because I’m genuinely curious. What makes the news in Sofia, Budapest or Bratislava mightn’t have hit the headlines on the BBC or Sky.

So, ‘What’s the news in Romania?’ I asked my Romanian colleagues yesterday as we sat down for a mid-afternoon Christmas lunch (the second in two days). They should know by now, of course, that what interests me is scandal and gossip, political or otherwise, but in the concerned silence that followed I suspect they were scratching their heads for trade balances, GDP growth, inward investment figures, and so on. Who cares about such things at this time of year, or ever, for that matter?!

‘I’ll tell you what’s the news in Britain,’ I offered, as the pause lengthened. ‘We’ve just sent a man on a dangerous mission to space, and another one on a dangerous mission to Brussels to renegotiate the terms of Britain’s EU membership. And a thousand happy and relieved immigrant Syrians are already complaining about the weather. If that’s not assimilation, then I don’t know what is.’

‘Been there. Done that. We sent our man into space years and years ago,’ one of my colleagues proudly pointed out, though it was probably before she was born.

‘And did he come back?’ I asked. And from there we quickly got to the factoid that I was born on the day that poor ‘one-way-ticket’ Laika (a Russian terrier of some kind, I believe) was blasted into space.

‘I saw Angela Gheorghiu in the street,’ another colleague offered (perhaps knowing that I have a soft spot for opera, if not for preening divas).

It was a gloomy afternoon, and the background music was funereal, though the words, apparently, were Christmassy and joyful. A sense of the absurd prevails in Romania and Romanians are naturally and properly distrustful of Government, of the Judiciary, of officialdom in general. I shouldn’t have expected good news.

To my mind, some of the best recent news has been the resignation of the Prime Minister, Victor Ponta, already a proven plagiarist, and the possibility that he might be charged with criminal fraud. But according to my colleagues it’s quite likely that a deal’s been done and he’ll avoid prosecution as a reward for resignation. So much for an independent legal system.

The fact that Romania’s jails are crammed with corrupt politicians and corrupt businessmen and women should also be cause for celebration, I thought, but there’s a sensible ‘let’s wait and see’ attitude about whether the judiciary is truly independent and sufficiently powerful. After the next election it’s possible that the jailers and the jailed will simply swap positions.

There’s also an interesting story about dogs. Romania, and particularly Bucharest, has always had too many. Former President Basescu, when Mayor of Bucharest, impressed his electorate by sterilising the wild canine population of the city, to non-Romanian Brigitte Bardot’s dismay (see Street Dogs). Some dogs were also offered to the Russian space programme, but were refused as being insufficiently Russian. Now, apparently, the aim is to forbid farmers from possessing too many – a ‘one dog on the plains and three dogs on the mountain policy’ is to prevail in rural Romania (see Romanian Shepherds Protest Dog Policy).  Who the beneficiaries might be (ramblers?) is not clear to me, but the result was an invasion of farmers waving agricultural implements that brought traffic in the city to a standstill on Tuesday. It’s good news of a kind, I suppose, that Parliament has nothing more important to debate.

Parliament has also brought a number of businesses to a halt by forbidding the public use of buildings over a certain age unless they’re certified as possessing sufficient structural strength to survive the next, long overdue, earthquake (see Might Close Down).

It was a jovial afternoon, and the food and wine were good, even as the sky darkened and the rain began to fall. It was a cold walk to the Athenee Palace Hotel.

Thursday was, by contrast a glorious day, and it felt as if the news could only be good. The sun was shining brightly on an ever-tidier Bucharest. Secret Santa called at the office while I wasn’t looking and left me with very good news indeed – a loaf of traditional Christmas bread (here shown a little squashed during my onward journey to Budapest). 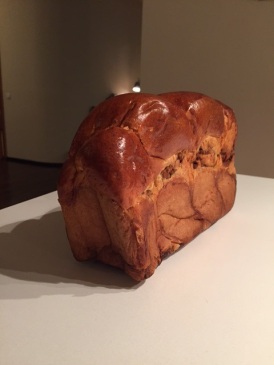