My brother and I are both musicians, and we both recently read Alan Rusbridger’s Play it Again, in which he describes how, as a moderately competent amateur pianist, he took on the challenge of learning and playing publicly Chopin’s ‘impossible’ Ballade in G Minor in a year (it took him nearly a year and a half in the end, his life, as editor-in-chief of the Guardian, very much at the mercy of other global events). One of the topics he discussed, in connection with learning a piece by heart, was the concept of how much ‘information’ music contains. 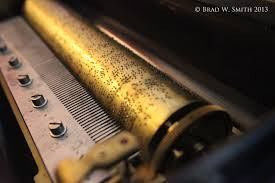 We can express the question “How much information is contained within a single piece of music?” in another way: “How much information do we need to store to enable a mechanical rendition of a piece of music that would be recognisable as a true representation by the human ear?”. Such storage mediums have existed for well over a century in the form of piano rolls, and in the modern-day equivalent of digital midi files. In their simplest forms only pitch, duration and pedalling were recorded as punched holes in a roll of card. (Intensity of attack and other refinements were added later.)

In considering what a musician needs to remember in order to perform, we can presume these basic components to be adequate. The layer of information needed to build a logical program for mechanical transposition into played notes as well as the layer of human ‘interpretation’ (which amounts to refinements and distortions of the original) can be ignored.

For the sake of this investigation, we assume that the music we intend to store is written over a regular grid of equidistant pitches and over a steady grid of pulses or beats.

So how can we express in a numeric manner what is stored on our imaginary piano roll?

The foundation of music is rhythm:

For this we need two parameters:

a) the length of the rhythmic unit to which the note belongs as expressed in the number of elapsed pulses that the unit would cover.

b) the number of evenly spaced notes that the rhythmic unit contains.

Some examples, assuming the pulse to be a quaver (or eighth note):

2,3    would express a semi-quaver triplet note

6,2    would express a duplet crotchet note over a three crotchet bar

But that’s not enough. We need to know when each note should start. This can be done in two ways:

a) to start immediately after a preceding note in a given musical ‘string’.

b) to start a number of pulses from a sequenced note in a relative string, as we shall see later. (For notes starting in between pulses, and avoiding the use of fractions, a rhythm-defined silence or rest is inserted.)

N.B. New strings can be started at any time and will either refer back to a sequence in another string for start positioning or to ‘zero’, the beginning of the piece.

To which we add a set of numbers describing pitch:

Pitch is most simply expressed in absolute terms. There are about one hundred possibilities on a concert piano. But we can also express pitch relative (in semi-tones) to the preceding note in a string (a melodic interval, positive or negative) and alternatively relative to a concurrent note in another string (a chordal interval, positive only). This latter method being similar to the ‘figured bass’ system of the baroque era. And for this we need each note to carry an incremental sequence within the string. The pedal and silence can be represented as special ‘notes’. Bar lines do not need to be represented, as they are only an inaudible visual aid to performers. (A piano roll does not record them.)

So now we have in the below ten variables all we need to render a whole piece of music out of a succession of linked notes:

Pitch relative to the preceding note in the string

Pitch relative to a sequenced note in another string

Number of notes within the rhythmic unit

Number of pulses from a relative sequenced note in a string

That’s a lot of numbers to store or ‘memorise’! But we can do better than this by optimising and compressing.

For example we could add:

An indicator that says ‘repeat’ the note and a number that says how may times.

An indicator that says ‘repeat’ the rhythm and a number that says how many times.

For example, a piece of music that consisted of repeating the same note in the same rhythm one thousand times could be described by a single ‘expression’, the note itself plus the compression extension.

Set up ’cells’ encapsulating commonly used pitch and rhythm structures such as scales, chords and chord sequences, giving them labels so that they could be referenced for re-use. These cells could be joined up sequentially, concurrently or even grouped together (larger on smaller) thus giving us the possibility of efficiently expressing repeated accompaniment passage work and sections. In other words these cells could be ‘stitched’ together – at their original pitches or relatively transposed.

Thinking of a simple canon such as Frère Jacques, it’s not hard to imagine how such a piece could be represented with minimal information.

The list of possible compression options is endless. However, there’s a balance to be preserved, whereby the referential complexity should not outstrip a simpler purely sequential representation.

So, going back to the original question, how much information is contained in a piece of music?

Considering that we might need 10 variables of 3 digits for each note in uncompressed format, this translates into approximately 100 ones and zeroes for each note. So the calculation is quite simple. The amount of binary information needed is the number of notes in a piece multiplied by 100. However this will be a maximum. For pieces that contain a degree of repetition and re-use of common patterns, this can be reduced considerably. True, new ‘stitching’ variables need to be added to each note expression, but this is counterbalanced by the efficiency of once-only library storage of referenced cells.

In the end we produce hugely complex constructions that need untangling by a sophisticated program. And though it’s true that the human mind does not work in this way, this approach to musical storage does, to some degree, mirror our ability to memorise simple repetitive and ‘predictable’ music more easily than the more complex and ‘unpredictable’ kind.

2 thoughts on “Music and Information – a guest blog post by my brother, Jonathan”