How far should we go to maintain a principled position?

Some have accepted martyrdom, execution, faced persecution or torture, on such issues as Biblical interpretation, political freedom, opposition to racism, and so on. Often these issues seem trivial to some of us. For example, issues of dogma that have divided Roman Catholicism from Protestantism seem like arguments about nothing to me. Some people have come to blows about styles of piano playing.

But we admire a principled position – almost as a matter of principle. We admire those who live consistently, with integrity, and accept the consequences of their beliefs, almost whatever they may be. We admire their moral courage, even sometimes, paradoxically, those whose beliefs we revile.

And then there is the Naked Rambler – Stephen Gough. 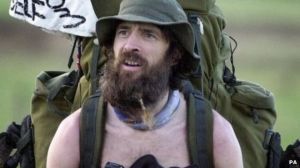 Stephen Gough, a retired and distinguished Royal Marine, is determined to assert his right (as he sees it) to appear in ‘his natural state’ at any time. He walked the length of Britain in only boots, socks and occasionally a hat. He has been arrested and imprisoned several times on various charges, including the catch-all ‘breach of the peace’ (a law, incidentally, that was used in the 1980s to prosecute men kissing each other in the streets of London). Recently he has also insisted on appearing before a judge in his ‘natural state’.

I myself have no objections to nudity. For a start you don’t have to look, and secondly, nudity is not in itself offensive. It is context, such as pornography, that might make it so.

But I do admire this man. He is silly, perhaps, and his is a principle that doesn’t matter so very much to me. But that he should go to such lengths, at some considerable cost to himself, to stand by his principles is admirable.

When we act on principle, however trivial others may think our principles are, we are at least acting consistently with our character. This is, I suppose, what ‘integrity’ means. We would not feel consistently ourselves if we gave them up without good reason. Abandoning principle involves distortion of character. It can feel like a failure that invalidates our life.

So I admire this very silly man, though no one need fear that I might follow his example.